Fantasy Aces has declared bankruptcy and is no longer an active site!

Fantasy Aces have a solid website and a great selection of sports offered.  Outside the top 2 DFS sites, their prize pools are some of the best in the industry and with lesser competition in player numbers it makes their Championship tournaments that much more enticing to play and qualify for.  For players who love stat crunching their Scout tool makes research that much easier then scanning the web yourself as they provide all the data right there for you.

Aces has provided us with a deposit bonus that trumps most of the big DFS sites out there.  Exclusive to us if you use promo code REALMONEY and you will receive a 200% deposit bonus up to $250.  You can enter this bonus code in the cashier section of your account when you go to make a deposit.  Most sites only offer a 100% bonus so Fantasy Aces is stepping up to the plate bigtime with their 200% bonus exclusive to our readers.

To give you an example if you deposit $100 then you will receive $300 in extra bonus cash when using REALMONEY as your code. As usual we always tell you that the money is released into your account in increments every time you participate in a paid game at Aces.  This is to protect against fraudulent behavior and no matter what promo code you use this will not change.  Once the bonus money is released you are free to use it in any contest or cash out.

Aces is one of the better DFS sites for the variety of fantasy sports available with the addition of PGA fantasy games in 2015.  Fantasy Aces offers the following sports for daily fantasy games:

Where they venture outside the box is with the types of formats you can play contests in.  There is, of course, the traditional classic salary cap format where you draft your roster to fit under or equal to the pre-determined salary cap and their own original format "SalaryPro".

SalaryPro is a contest that allows you to play with a flexible salary cap.  You can choose to go under the cap or over the cap opening up a wide variety of drafting options at your disposal.  There is a catch if you choose to go over your salary cap your team will be penalized points based on how much you go over.  On the flip side if you stay under the cap your team is awarded bonus points for how much you stay under.  This is really geared towards a skilled DFS player who can predict a good night for cheaper players or know when to go over the cap because the points gained will be worth it in the end.

Here's the breakdown of how points are rewarded for cap management:

Staying Under the Salary Cap Bonus

Going Over the Salary Cap Penalty

It will take you a bit of a learning curve to find the bonus or penalty to take but if you can perfect this balance you have the potential to dominate less informed players who aren't well prepared for this SalaryPro format.  We like the idea and hope Fantasy Aces keeps on developing new innovations in contest types.

In addition to the two contest types you can play Aces has the usual game types offered for it's players as well as a couple games you don't see at every daily fantasy site.  It's a nice variety and should please most DFS players.  We would like to see them add "Pick'em" games in the future to complete their lineup.  Here are all the game types currently offered:

Like we mentioned earlier you can play in either Classic Salary Cap mode or try Fantasy Aces original SalaryPro contest.  Each sport has a different total salary cap as determined by Aces, we  break down the specifics below.  All stats and winning scores are determined by Fantasy Aces 3rd party stats provider SportsData LLC.  You may unregister for any contest up to 20 minutes before start time and you may not unregister from any already filled contests.  It would be nice to see them reduce their exit time to maybe 10 minutes because hey things happen, but we understand that's a tight time crunch with their player base right now.  Here is the specific roster positions and cap for each sport:

Fantasy Aces has been tinkering with their website design of late and there has been a steady improvement since their very early conception.  The lobby is pretty straight forward with a top menu bar that has all the necessary account tools as well as something they call their "Scout" tool which we will explain below.  Their biggest promotions are featured prominently above the contest selection lobby making it easy to find out more details about each one.  Below are the contests themselves which can be limited to certain sports by clicking on the appropriate header if that is what you prefer.  The filters are very easy to use by clicking on the "filter" button and then selecting the desired criteria to limit what contests you will be shown.  All and all a very easy lobby to navigate and use. For the actual contest details it would nice to see the font sized increased as it is rather difficult to read the fine text font they have chosen to use right now, if you have poor eyesight get ready to squint.  Another small issue we have with the design is the yellow color they use to show their featured games.  While it wouldn't be such a problem if it was only used for a few contest but Aces tends to have 10 or more featured contests which leaves you staring at a big slab of yellow right of the bat.  Maybe if they distinguished their featured contest with different colors for different types of games it wouldn't be such an eyesore.  Beauty is in the eye of the beholder however, and it really doesn't takeaway from the site as a whole.  That fact that they have so many prominent featured games on a daily basis is a positive sign for a site trying to secure themselves as the #3 in the business.

A really cool feature at fantasy aces is their scout tool, which is an in-house stats spreadsheet for you to use to do your DFS homework.  All the current season stats of each player is at your disposal for all the sports they offer.  The best part is it is totally customizable and sortable.  You can analyze player performance by individual player or team and you can look at stats for the entire season or at weekly intervals.  For those of us who love to analyze the numbers, this can save a lot of time bouncing around from website to website trying to copy and paste into our own spreadsheets.  The "Scout" button beside each player allows you to build a bookmark type list of players you want to closely follow for a period of time or full the full year.  When you go to draft your team you will see a scout button on the player position menu that allow you to see all of your bookmarked players and from there you can easily draft them to your lineup.  The only stat feature missing is a players match-up vs the team he's playing that night.  Overall this is a great tool to use to scout players on hot and cold streaks and check out their yearly performance, a really solid addition to the Aces platform.

The draft screen is simply designed and easy to use which is always a positive.  All the details of the contest and scoring rules are available with the click of the button near the top.  We like the drop down menu for match-ups as opposed to some sites that have them scrolling horizontally across the top half of the screen.  A nice feature is the graphical fields they have below the player box that fills up with player cards as you draft each position.  A quick glance gives you a fast reminder of what positions you still need to address.  By clicking on a player name a popup will display the players card which shows you stats and recent news on each player.  Match-ups vs the players opposition are not provided, however.  Also, some notable player card pictures are still missing from their database, for example, R.A Dickey or Yasiel Puig.  This is certainly nitpicking but every little feature adds up to an overall better experience at a Daily Fantasy Sports site.  Player injuries are clearly marked with red text denoting a player on the DL which is an important feature for any site to have.  Overall the lobby screen gets a thumbs up from us.

Deposits and Withdrawals at Fantasy Aces

You can select one of Ace's pre-determined selections or just enter your own custom amount of money to deposit.  The minimum amount you can deposit is $5. To withdraw money from your account you can use:

The minimum amount you can withdraw at any time is $10.  We have both deposited and withdrawn money from our Fantasy Aces account with no problems to date.

Aces continue to improve and add new promotions to their website as they grow bigger.  There are not many DFS sites that can compete in prize money with the big two, but Aces at least offers enough cash prizes in their biggest contests to get your blood flowing.  Here are the best promotions they have to date:

In 2015, Aces is throwing a huge $500,000 Football Championship live from the Palms Casino Resort in Las Vegas.  The prize pool is double the size of their last Football event which a great sign for the growing DFS site.  You can qualify from Week 1 to Week 15 and highlights include:

Aces kicked off the MLB season in style with the announcement of their $250,000 Baseball Championship.  The grand prize is $100K and all qualifiers (20 in total) get a 3 day luxury trip to Southern California for you and a guest which includes:

The least you will walk away with if you qualify is $2000 and one hell of a trip, especially if you are a Los Angeles Angels fan.

The 100K Basketball championship is an ongoing success for Fantasy Aces.  The grand prize is $40,000 but don't be surprised if this increases year after year.  Much like their MLB championship, Aces players who qualify get treated to a luxurious experience in Newport Beach, California.  Check out the video of the 2015 Fantasy Aces Basketball Championship below, looks like a great time in a beautiful city.

We rank Fantasy aces a 3 out of 5.  Fantasy Aces major goal is to be alone in the #3 spot in the DFS landscape and I'm sure one-day #1 like every site out there.  They have started out with a solid first few years and definitely should be considered in the conversation as #3.  We love the innovation they have brought into the game with their SalaryPro contests and with the addition of PGA golf in 2015 it gave them a one-up on competitors yet to do so.  We hope to see bigger prize pools and more diverse trips, with increased player growth this could leave them alone at the #3 spot for many years to come. 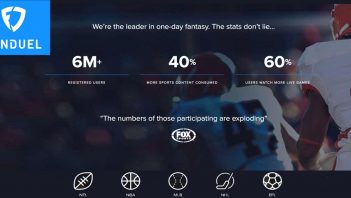 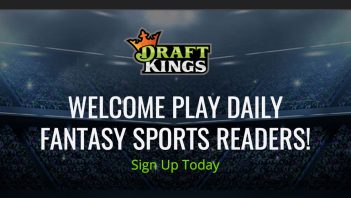 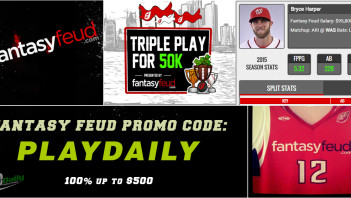 A mainstay in the industry since 2012, Fantasy Feud has been a consistent performer with increasing prize pools and excellent sports offerings. See our review of Fantasy Feud…