Menu
Home > FAQ'S > Types Of Drafts > What is a Snake Draft?

If you have landed on this page you are more then likely getting ready for the start of a new sports season and have joined a fantasy snake draft league. If you are new to these types of drafts you must be wondering, so what is a snake draft anyways?

The Snake Draft gets its name from the way the fantasy draft process moves along.  As in most standard fantasy sports drafts each team has one pick per round in a pre-determined order.  The amount of rounds in your draft will depend on how many roster spots your league has, so 10 roster spots would equal 10 rounds. Once you get to the final draft pick of the round the team that choose last will now choose first in the next round, therefore the draft snakes back upon itself.  The simplest way to explain how a snake draft works is that the order of picks reverses after each round. The reason for this is so the owner who gets the 1st overall pick, does not get that 1st pick advantage in every round, thus making the pool unfair among competitors. Snake Drafts are commonly used for Fantasy Football Leagues to provide a fair and balanced playing field for each player.

Here's an example of how a Snake Draft works:

Let's say you have 10 fantasy players in your snake draft, so the 1st round of picks go in order starting from 1-10. You got lucky and received the #1 overall pick in the snake draft which means you have first crack at any player you want once the draft begins in round one. You draft your player and the picks carry on until you get to the very last team in the 10th spot. Once that pick is in Round 2 will begin. Team #10 will now have the 11th pick (or 1st pick of round 2) and you will have to wait till pick #20 to make your 2nd player selection.

So to recap the team that picks 10th, will have the very next pick and select 11th. This reverse order continues till you get to the team that selected 1st in the last round and now has the 20th pick in the second round. This process continues up and down (like going from the head of the snake to the tail and then back up) until all players have been drafted.

Here is a Snake Draft Cheat Sheet you can use as a reference come draft day.  This based on a 10 team league but gives you an idea of which picks each team would potentially have. 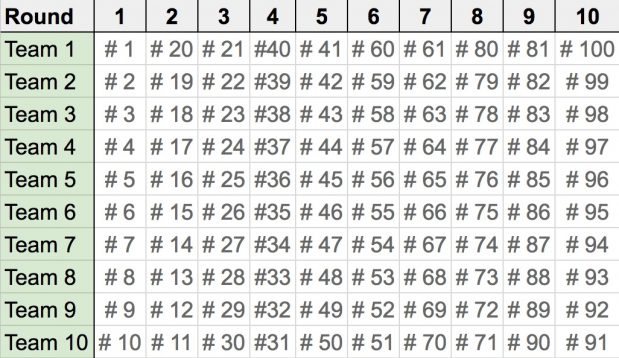 If you are looking for a site and/or mobile app to play in fantasy snake drafts then there is only one place to go, Draft.com. They are the best new site to launch in years and are giving diehard fantasy sports players what they love, snake drafts and nothing but them. The team behind the app is well-known and have already had massive success in the DFS industry with their previous site Star Street which was bought out buy DFS heavyweight DraftKings.

Here are some of the amazing features at Draft:

There are two versions of the draft - Live Snake Drafts and Offline Snake Drafts. A Live Snake Draft has the participants choosing their teams in real time scheduled at specific time of the day.  When it is your turn to draft your selection you make your choice in an allotted time frame (usually 1-3 minutes) and the draft continues to move forward.  These type of snake drafts are more typically used when playing with your friends or on large sites like ESPN or Yahoo.

In an Offline Snake Draft, the draft is done shortly after all the participants have joined a particular league. Players can pre-set the ranking for which players they would prefer to receive depending on their place in the draft and the computer automatically picks the best available player on their list when it is their team's turn to draft. When the draft is complete your team is set for that night’s games. The draft order is usually set randomly by the sites software to determine who picks when and in what order.  You will most often see this type of format at a Daily Fantasy Sports site. 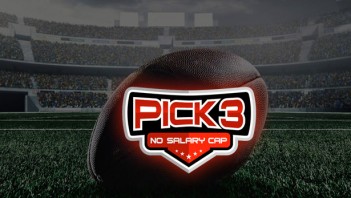