Falling behind in your knowledge of the biggest fantasy sports boom ever?  No worries we are here to fill you in on every Daily Fantasy Sports term uttered among the masses.  This is the ultimate Daily Fantasy Sports Glossary that will keep you informed with any DFS term you may be unfamiliar with.   We will constantly update this list so make sure to bookmark the page for reference later. We have broken down the daily fantasy sports glossary into specific categories to make it easier for you to find the term you are looking for.  Each category in alphabetical order:

Day to Day.  This is usually used to describe an athlete’s injury and can be found on the player draft screen

Frequent Player Points.  Some DFS sites give you points for contests you play in.  You can then use these points to enter contests, buy gifts, acquire prizes and so on. Points are handed out regardless of whether you win or lose the contest

Fantasy Points.  Shown on a contest standings screen and shows how many points each player has.

Fantasy Points Per Game. The amount of fantasy points the athlete averages per game during the season

Injured Reserve.  Used to describe when an athlete is placed on the injury list and is currently not playing

League of Legends.  An Esports game that is offered by some daily fantasy sports sites.

Player Innings Remaining.  Means how many innings your drafted baseball players have left in their live game

Player Minutes Remaining.  Means how many minutes your team of drafted players have left in their live games

Point Per Reception.  A scoring system used in Fantasy Football that awards 1 point for every catch made

Unlawful Internet Gambling Enforcement Act.  This is the internet gambling bill passed in 2006 that carved out a special exemption for fantasy sports and thus gave birth to DFS as we know it today

World Fantasy Football Championship.  Most DFS sites host their own version of the WFFC, the two biggest belong to our partners Draftkings and Fanduel

Yet to Play.  You will usually see this on a live contest screen and it means how many of your drafted players have yet to start their games

The amount of money it will cost you to enter a contest, same as entry fee

A special bonus that is given out to new players when joining a daily fantasy sports site. They are incentives for you to join a site and can sometimes require a promo code.

The total amount of money you can deposit at a DFS site at any one time.  Some sites allow you to contact them if you wish to increase your limits.

A drafting feature that allows you to change any player on your team for someone else as long as their game has not started yet.  The “Late” aspect means that even if you have players who have already started playing in early games you can still swap out any players on your team playing in late games. Not all sites allow this feature so be sure to check the rules beforehand.

When a guaranteed contest prize pool is paying out more than the total amount of entry fees paid to join.  If there is a GPP of $10,000 and the site has only taken in $8000 worth of entry fees then the overlay is $2000.  The DFS site is losing money in these situations and it is to the advantage to the player.  Always be on the lookout for DFS overlays.

The range of total winning payouts in a contest.  So if the payout zone is 1 to 1000 then the top 1000 users will win money. FantasyDraft.com, for example, is a site that has large payout zones.

The athletes available for you to draft for a given contest

The percentage amount a daily fantasy site takes from all the buy-ins for a contest as a fee, usually this is around 7-10%.  It’s basically how the company earns their profit.  Think of it like a “cover charge” a bar might charge you to enter.

To get a friend or acquaintance to join a DFS site once you have already signed up. Most sites have a refer-a-friend program where you get compensated in some way for recruiting new players to sign-up.

A prize won that will gain you entry into a fantasy contest.  For instance, you win a $5 ticket that can be used to enter any $5 entry fee contest

An athlete who is projected to put up above average fantasy points relative to his salary.  These “value” situations tend to occur when a starting player gets injured and the replacement player with a low salary gets a much bigger role

A contest format where half of the field places in the money.  For example, if there is 100 total entries then the top 50 players would win money

Same as a “Multiplier” contest where you can win a certain payout multiplied by a factor. For example, a 10x Booster DFS contest would earn you 10 times your entry fee if you place in the money

H2H or Head to Head

A contest format where you play one on one vs another opponent.  Some sites randomly assign your opponents while others you can see who you are playing beforehand

A contest where players can enter multiple teams in the same contest. There can sometimes be restrictions by sites on the number of teams you can enter per player

A type of DFS contest where your payout is multiplied by a certain factor.  For example, a 5x multiplier would pay out the winners five times their entry fee

The most common type of daily fantasy sports contest.  You are given a total amount of salary in which to draft your fantasy players and each player is assigned a dollar amount.  Your goal is to draft the best possible team of players and stay under your allowed salary cap.

A type of contest format where winning gains entry to the next level or step up.  For example, winning a step one contest gets you to a step two contest worth more money.  Usually, there are multiple step contests towards a grand prize at the end.

A tournament format where you have to finish above a certain point or standings threshold in order to make it to the next day or week. For example, the top 50 players in the standings survive till the next day and play all over again.  These tournaments are usually spread out over days or weeks  and are very popular for the NCAA March Madness tournament.

Fantasy Sports Contest where only a small number of users win money, usually around 10 to 20 percent of entrants.  This a high risk, high reward type of contest where if you finish among the very top of the standing the prize money is very lucrative

The projected best possible points an athlete can earn on a given day.  You typically want to look for players with “high ceilings” meaning they have the right match-up to potentially have a big fantasy day point-wise

A slang term meaning to stay away from drafting an athlete for your term.  For example, “fade” Andrew Luck this week he’s up against a tough pass defense

A slang term used to describe weak fantasy sports players.  Usually beginner players or ones who do not do any research before playing and are preyed on by stronger players or “Sharks”

The opposite of Ceiling and the projected worst possible outcome points wise for an athlete.  For example, if the worst Lebron James ever does on an off night is 15 points and 1 rebound then those stats would be considered his floor

A slang term used to describe the most elite DFS players.  These are highly skilled players who do hours of research and have a huge bankroll looking to prey on much weaker “fish” DFS players

A word used to describe an athlete not expected to put up high fantasy points and is undervalued among the majority of players.  Finding a sleeper pick that comes through for your team can leapfrog you to the top of the standings

A common word that you may see on a live chat screen.  It means to do some trash-talking to your opponents.

A popular strategy used in daily fantasy sports.  When you draft multiple players on the same team in one fantasy lineup.  It is a popular tactic used in Fantasy Football or Fantasy Baseball. For example, you draft a QB with multiple receivers from the same team.

When a DFS player enters the exact same lineup over and over again in multi-entry contests.  The idea is that if it is a winning lineup it can potentially sweep the standings and place 1 through 10 for example. 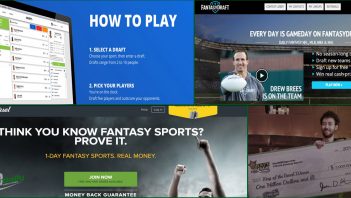 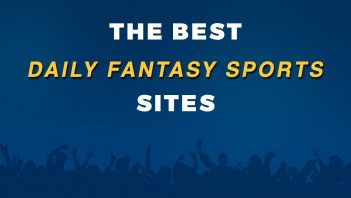 Our rankings of the best DFS sites in the industry…